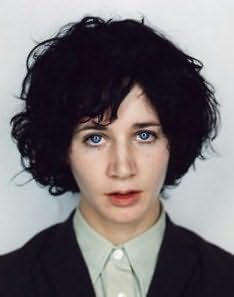 (b.1974)
Miranda July is a writer who also makes movies, performances, recordings and combinations of these things. July's stories can be read in The Paris Review, The Harvard Review and Black Clock. Her radio performances can be heard regularly on NPR's The Next Big Thing. July won the Camera D'or at the 2005 Cannes film festival with her feature writing and directing debut, Me and You and Everyone We Know, which premiered at the 2005 Sundance Film Festival, and will be released theatrically in Summer 2005. Her short film Nest of Tens was shown in the 2002 Whitney Biennial for which July was also commissioned to produce a sound installation, The Drifters. July was again invited to participate in the 2004 Whitney Biennial with her participatory website, learningtoloveyoumore.com, created in collaboration with artist Harrell Fletcher.
Novels
The First Bad Man (2015)

Collections
No One Belongs Here More Than You (2007)

Eeeee Eee Eeee (2007)
Tao Lin
"Tao Lin writes from moods that less radical writers would let pass - from laziness, from vacancy, from boredom. And it turns out that his report from these places is moving and necessary, not to mention frequently hilarious."

The Lovers (2010)
Vendela Vida
"The Lovers pulls you out to sea with a masterful hypnosis. I was so enthralled by the grief, the sticky and sandy details, and especially the perfect articulation of feminine self-awareness that I didn't realize how deep in I was. I read the last page with a tearful gasp."

The Listeners (2012)
Leni Zumas
"Leni Zumas understands your quiet agaony and describes it with such wry, unflinching familiarity that even the gory details ring true."

The Idiot (2017)
Elif Batuman
"The Idiot is a hilariously mundane immersion into a world that has never before received the 19th Century Novel treatment. An addictive, sprawling epic; I wolfed it down."