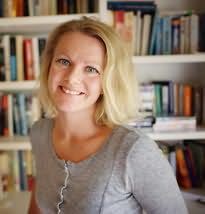 Australia (b.1970)
Sister of Wendy James
Rebecca James was born in Sydney, and grew up in various different places throughout New South Wales, including Bourke, Sydney, Wellington and Bathurst. During her twenties Rebecca worked as a waitress, an English teacher in both Indonesia and Japan, a bartender, and (most memorably) a mini-cab telephone operator in London. During her thirties Rebecca spent most of her time having babies and helping her partner run a small kitchen business. Rebecca has started several university degrees but has yet to place any letters after her name. Despite her highly developed procrastinatory skills she has managed to write a book or two and plans to spend her forties, fifties, sixties, seventies, eighties and nineties finishing several more. Rebecca lives in Australia with her partner and their four sons.
Novels
Beautiful Malice (2010)
Sweet Damage (2013)
Cooper Bartholomew is Dead (2014)