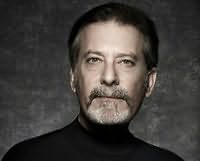 (b.1949)
Husband of Faye Kellerman, Father of Jesse Kellerman
Jonathan Kellerman is the #1 New York Times bestselling author of forty-one crime novels, including the Alex Delaware series, The Butcher's Theater, Billy Straight, The Conspiracy Club, Twisted, True Detectives, and The Murderer's Daughter. With his wife, bestselling novelist Faye Kellerman, he co-authored Double Homicide and Capital Crimes. With his son, bestselling novelist Jesse Kellerman, he co-authored The Golem of Hollywood and The Golem of Paris. He is also the author of two children's books and numerous nonfiction works, including Savage Spawn: Reflections on Violent Children and With Strings Attached: The Art and Beauty of Vintage Guitars. He has won the Goldwyn, Edgar, and Anthony awards and has been nominated for a Shamus Award. Jonathan and Faye Kellerman live in California, New Mexico, and New York.

In a True Light (2001)
John Harvey
"John Harvey's writing is beautifully nuanced, his sense of story impeccable, his characters unforgettable."

Death's Little Helpers (2005)
(John March, book 2)
Peter Spiegelman
"He knows where the bodies are buried and he knows how to write."

Ghosttown (2007)
(Whitney Logan Mystery, book 3)
Mercedes Lambert
"Ghosttown is a noir masterpiece. One of the most evocative LA crime novels ever written."

The Worst Thing (2011)
Aaron Elkins
"An intriguing novel of suspense as well as an evocative portayal of the inner workings of a mind tormented by terror."

Freezing (2011)
(Jayne and Steelie, book 1)
Clea Koff
"Freezing is an intricately plotted thriller rich with fascinating forensic details that only a pro could deliver. A great debut."