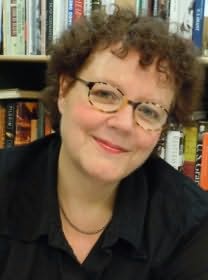 Julia Keller was born and raised in Huntington, West Virginia. She graduated from Marshall University, then later earned a doctoral degree in English Literature at Ohio State University.She was a Nieman Fellow at Harvard University and has taught at Princeton and Ohio State Universities, and the University of Notre Dame. She is an essayist for The NewsHour with Jim Lehrer on PBS. In 2005, she won the Pulitzer Prize for Feature Writing.Julia lives in a high-rise in Chicago and a stone cottage on a lake in rural Ohio.

Novellas
The Tablet of Scaptur (2017)

Fateful Mornings (2017)
(Henry Farrell, book 2)
Tom Bouman
"My father always said that you can judge people by the way they keep their tools: clean and sharp or soiled and soft. Tom Bouman's tools -- the words he uses to make Fateful Mornings -- cut straight and true, in this riveting mystery about a good man caught in the ruined Eden of rural America."

The Widows (2019)
(Kinship, book 1)
Jess Montgomery
"In the hard-luck, homespun Appalachian town of Kinship, Ohio, in 1924, two strong women become unlikely comrades to solve a murder in this flinty, heartfelt mystery that sings of hawks and history, of coal mines and the urgent fight for social justice."

A Ritchie Boy (2020)
Linda Kass
"Historical fiction is a literary time machine. Thanks to the talent and imagination of Linda Kass, this journey back to the tragic days of World War II is both solemn and joyous - solemn because of the ghastly shadow of Nazism overtaking Europe, and joyous because of the forces of light that rose up to oppose it. These linked stories create a seamless and poignant whole, a deeply felt, richly described, and quietly moving meditation on faith, passion, sacrifice, struggle, and the everlasting power of family love."
Visitors to this page also looked at these authors
Jonathan Kellerman
Michael Connelly
Alex Kava
Faye Kellerman
J A Jance
Robert Crais
Greg Iles
Elly Griffiths
John Grisham
William Kent Krueger
Linda Castillo
Craig Johnson
Louise Penny
Lisa Scottoline
Jayne Ann Krentz
Jan Karon