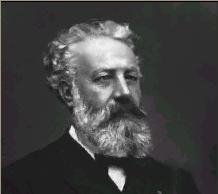 (Jules Gabriel Verne)
France (1828 - 1905)
One of the principal inventors of what later became known as sf, Jules Verne wrote highly coloured nineteenth century romantic adventure stories, many of which turn on wonderful inventions like submarines or flying machines or on amazing events like the grazing of the Earth by a comet (in Hector Servadac). Verne was a Frenchman of Radical sympathies, many of whose stories turn on his political sympathies--it is significant that Captain Nemo in 20000 Leagues under the Sea is a rebel against British imperialism in India, and many of his villains are Southerners from the Confederacy or Prussians; Verne was fond of comic national stereotypes--the heroes of From Earth to the Moon and Around the World in Eighty Days are respectively joke Yankee engineers and an English clubman obsessed with punctuality. Among his other books that have worn best are Five Weeks in a Balloon and A Journey to the Centre of the Earth. There is always an interesting tension in Verne between his passionate involvement in the products of his imagination and his desire for accuracy. Verne greatly admired the stories of Edgar Allan Poe, and stressed the importance of strict scientific accuracy, disparaging H G Wells for his more cavalier inventiveness.

Non fiction
Exploration of the World (1879)