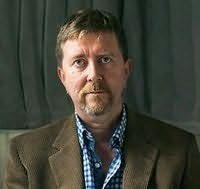 Husband of E L James
Niall Leonard grew up in Newry, Northern Ireland. In 1977 he attended the University of York to study English, and&#160from there went on to The UK National Film and Television School where he trained as a screenwriter and director.  His first film was Absolution, an old-fashioned revenge thriller with a supernatural twist, filmed on location in Newry in 1983 and starring Derek Halligan.  Niall returned to Newry In1985 to shoot locations for his graduation movie, the black comedy No Mans Land, starring Patrick Bergin and Des McAleer.

As part of the 2011 Nanowrimo novel-writing event Niall wrote Crusher, a gritty crime thriller set in London featuring Finn Maguire, a dyslexic young offender investigating the murder of his father.  The novel was picked up by Random House for publication in September 2012.

Niall has led seminars and workshops on screenwriting and script editing for the BBC, the Northern Ireland Film Council and the Irish Screenwriters Guild, and lectured on the creative process at the University of Reading.

He is married with two kids and a rather smelly dog and lives in West London.