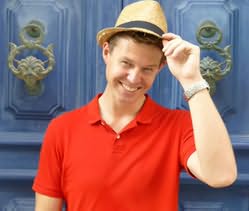 New Zealand
James Maxwell found inspiration growing up in the lush forests of New Zealand and later in rugged Australia where he was educated. Devouring fantasy and science fiction classics at an early age, his love for books translated to a passion for writing, which he began at age eleven.

He relocated to London at age twenty-five but continued to seek inspiration wherever he could find it, in the grand cities of the old world and the monuments of fallen empires. His travels influenced his writing as he spent varying amounts of time in forty countries on six continents.

He wrote his first full-length novel, Enchantress, while living on an isle in Thailand and its sequel, The Hidden Relic, from a coastal town on the Yucatan peninsula in Mexico.