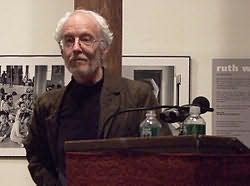 (b.1947)
James Morrow is a fiction author. A self-described "scientific humanist", his work satirises organized religion and elements of humanism and atheism.He lives in State College, Pennsylvania with his wife, Kathryn Smith Morrow, his son, Christopher, and their dogs. His cousin is the journalist Lance Morrow.

At the City Limits of Fate (1996)
Michael Bishop
"Forrest Gump's mother, in her eternal insipidity, insisted that life is like a box of chocolates. It isn't. But Michael Bishop's new short-story collection, I discovered, does resemble a box of chocolates. Be warned, however: the confectioner is a bit of a madman and something of a sorcerer, and when you bite into one of these goodies, you never know what's going to fly out: a Japanese demon, a malevolent butterfly, a numinous cat, a blob of Savior's blood. At the City Limits of Fate is habit-forming and delicious. Eat up."

My Father's Ghost (2002)
Suzy McKee Charnas
"...his daughter conveys each lesson with an unflinching eye, a knowing voice, and a forgiving heart."