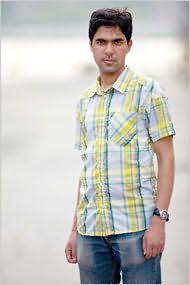 India (b.1984)
Karan Mahajan is a Joseph Henry Jackson Award-winning Indian novelist. Mahajan was born in Stamford, Connecticut, and grew up in New Delhi, India. He studied English and Economics at Stanford University. He currently lives in Fort Greene.
Novels
Family Planning (2008)
The Association of Small Bombs (2016)

The Incendiaries (2018)
R O Kwon
"A swift, sensual novel about the unraveling of a collegiate relationship and its aftermath. Kwon writes gracefully about the spiritual insecurities of millennials."

The World Is a Narrow Bridge (2018)
Aaron Thier
"Hilarious, absurd, and cosmically attuned."

Trinity (2018)
Louisa Hall
"Trinity is an intelligent and sweeping account of the characters - some real, some fictional - swirling around the testing of the first atomic bomb. It is also an affecting meditation on the ways in which we betray others and, in the process, ourselves."