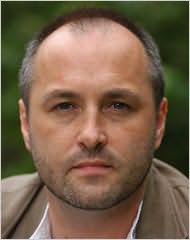 Ireland (b.1965)
Colum McCann is an Irish-born writer of literary fiction, whose novels include This Side of Brightness, Dancer, and Zoli. McCann teaches creative writing at Hunter College, part of the City University of New York.

Tenderwire (2006)
Claire Kilroy
"There is a fine balancing act going on here - Claire Kilroy walks the literary highwire. This is a marvelous novel - pacy, precise, lyrical, endearing and unpretentious."

Away (2007)
Amy Bloom
"I haven't read a novel in a long time that I genuinely wanted to get back to, just to sit down and read for the pure joy of it. Away is a book full of tender wisdom, brawling insight, sharp-edged humor and - if it's possible - a lovely, wayward precision. Amy Bloom has created an unforgettable cast of characters. Lillian, the heroine, or anti-heroine, somehow always manages to do what great journeys always do - continue. A marvelous book."

Lies My Mother Never Told Me (2009)
Kaylie Jones
"Unadorned, poignant, and honest to the core. Kaylie Jones's memoir is a high, emerging from the shadows of a writing life."

The Tiger's Wife (2011)
Téa Obreht
"Téa Obreht is the most thrilling literary discovery in years."

Solace (2011)
Belinda McKeon
"An elegant, consuming and richly inspired novel. A superb debut. This one will last."

Boundaries (2011)
Elizabeth Nunez
"Elizabeth Nunez is one of the finest and most necessary voices in contemporary American and Caribbean fiction."

Southern Cross the Dog (2013)
Bill Cheng
"An incredibly daring and powerful debut. Not only does Bill Cheng set the language on fire...he creates a whole new territory of storytelling."

The Suicide of Claire Bishop (2015)
Carmiel Banasky
"Daring, precise, and linguistically acrobatic, this novel brings a history of America alive, from the war protests in the sixties to turn-of-the21st-century art theft. A fearless portrayal of madness and its consequences...This is a new writer to savor, reminiscent of Nicole Krauss, Michael Chabon and Andrew Sean Greer."

Your Heart Is a Muscle the Size of a Fist (2016)
Sunil Yapa
"A raw and rare talent, Yapa strides forward with a literary Molotov cocktail to light up the dark."

We Love You, Charlie Freeman (2016)
Kaitlyn Greenidge
"This is a story about family, about language, about history and its profound echoes."

A Line Made By Walking (2017)
Sara Baume
"When I finished Sara Baume's new novel I immediately felt sad that I could not send it in the post to the late John Berger. He, too, would have loved it and found great joy in its honesty, its agility, its beauty, its invention."

Reservoir 13 (2017)
(Reservoir)
Jon McGregor
"Jon McGregor is a writer who will make a significant stamp on world literature. In fact, he already has."

Shadow Man (2017)
Alan Drew
"Shadow Man revises the old detective story and turns it in several fascinating directions. Alan Drew writes with precision, subtlety, and a streak of suspense that does not often color the literary novel."

Home Fire (2017)
Kamila Shamsie
"Into the ranks of international voices steps Kamila Shamsie, who seems as if she has heard, and listened, to the music of what surrounds us."

The Ruined House (2017)
Ruby Namdar
"In The Ruined House a ‘small harmless modicum of vanity’ turns into an apocalyptic bonfire. Shot through with humor and mystery and insight, Ruby Namdar's wonderful first novel examines how the real and the unreal merge. It's a daring study of madness, masculinity, myth-making and the human fragility that emerges in the mix."

In the Cemetery of the Orange Trees (2018)
Jeff Talarigo
"As much a book of poetry as a novel, as much a symphony as a memoir, this is an extraordinary book from a writer at the top of his powers. Reminiscent of Berger and Calvino, Jeff Talarigo manages to capture the breadth and circumference of story-telling, while also giving us a privileged insight into the daily life and dreams of Gaza."

Unworthy (2018)
Antonio Monda
"With elegance, grace, and clarity, Antonio Monda depicts a crisis of faith and longing in New York in the 1970's. This finely-crafted love story captures the swirling contradictions not only of the past, but of the present, too."

The Falconer (2019)
Dana Czapnik
"An unsentimental education in all that is urgent, soulful and intimate. As much the portrait of an era as it is the portrait of an adolescence, this is a crossover novel that will thrill readers of all generations. The Falconer captures the grueling, exhilarating pathos of one woman’s quest to become whole. A wonderful debut."

My Last 10 Minutes 38 Seconds in This Strange World (2019)
Elif Shafak
"Elif Shafak brings into the written realm what so many others want to leave outside. Spend more than ten minutes and 38 seconds in this world of the estranged. Shafak makes a new home for us in words."

The Butchers (2020)
Ruth Gilligan
"Gilligan braids beauty and brutality together in a seamless literary thriller. With plot twists worthy of Tana French and language reminiscent of Téa Obreht, this young Irish writer has crafted a story that is dark, wild, mythic, unsuspecting, and absolutely riveting."

Actress (2020)
Anne Enright
"With Anne Enright, we are always in the country of the first-rate. Her work is stark, clear, authoritative, funny and inventive. We come away from her books consistently refreshed and renewed. She understands the full capacity of our stories and our language, braiding them together with apparent ease."

Peace Talks (2020)
Tim Finch
"There are war stories and there are love stories, but we only occasionally get war stories and love stories braided together. Tim Finch has written a wonderful novel, tiny and epic both. Laced with humour and sadness, this is an intimate account of what it means to make peace, both with others and with oneself."