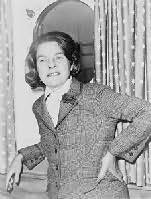 (1912 - 1989)
Mary McCarthy was an American literary critic and author of more than two dozen books including the 1963 New York Times bestseller The Group. Born in Seattle, McCarthy studied at Vassar College in Poughkeepsie, New York, and graduated in 1933. After moving to New York City, McCarthy became known for her incisive writing as a contributor to publications such as the Nation, the New Republic, and the New York Review of Books. Her debut novel, The Company She Keeps (1942), initiated her ascent to become one of the most celebrated writers of her generation, a reputation bolstered by the publication of her autobiography Memories of a Catholic Girlhood in 1957, as well as that of her now-classic novel The Group.
Novels
The Company She Keeps (1942)
The Oasis (1949)
The Groves Of Academe (1952)
A Charmed Life (1955)
The Group (1962)
A Source Of Embarrassment (1964)
The Birds of America (1965)
Cannibals & Missionaries (1979)

Enchantment (1984)
Daphne Merkin
"These complexities . . . are what chiefly held my attention. But there is another quality--[Merkin's] boldness, lack of shame or modesty. The book fascinates by its openness, which repels at the same time. That's why I had to read to the very last page."
Visitors to this page also looked at these authors
Tom McCarthy
T J Payne
Jake Arnott
Liza Marklund
Peter May
David Liss
Alexander McCall Smith
Danielle Steel
Colleen McCullough
Scott McGough
Francis Spufford
Carol Ann Duffy
Val McDermid
Ian Stewart
Robin Maxwell
Mark Sullivan