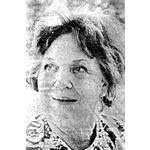 (1903 - 1992)
Mary Norton was born in London in 1903, and brought up in Bedfordshire, which was the setting for The Borrowers. In 1941 she was given a war job in America, and worked for two years for the British Purchasing Commission in New York. It was during this time that she began to write. After the war, she moved back to England with her family and continued writing and acting. Mary Norton died in 1992.

Collections
The Bread and Butter Stories (1998)