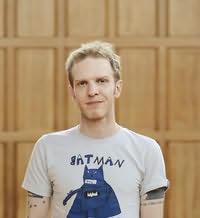 Bob Proehl grew up in Buffalo, New York, where his local comics shop was Queen City Bookstore. He has worked as a bookseller and programming director for Buffalo Street Books, a DJ, a record store owner, and a bartender. He was a 2012 New York Foundation for the Arts Fellow in Fiction and a 2013 resident at the Saltonstall Arts Colony. He has written for the 33 book series and worked as a columnist and reviewer for the arts and culture site PopMatters.com. Proehl currently lives in Ithaca, New York, with his wife, stepson, and daughter.

We Are Satellites (2021)
Sarah Pinsker
"Pinsker writes intensely human sci-fi, exploring with nuance and heart the ways technology impacts the emotional lives of her characters....it’s a deeply empathetic story of a family struggling with everyday impossibilities. We Are Satellites will drill a tiny—entirely painless—aperture in the side of your skull, snake its way inside, and rewire how you think about the lines between yourself, technology, and those we love."
Visitors to this page also looked at these authors
S J Morden
Cadwell Turnbull
Peter V Brett
John Joseph Adams
Natasha Mostert
Patrick Rothfuss
Kristin Cast
Mari Mancusi
Alison Weir
P C Cast
Naomi Novik
Brandon Sanderson
Lauren Weisberger
Erin Hunter
Fiona McIntosh
Karen Kingsbury