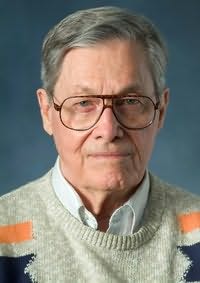 (b.1923)
James Gunn was born in Kansas City, Missouri, in 1923. He received his B.S. degree in journalism in 1947 after three years in the U.S. Navy during World War II, and his M.A. in English in 1951, both from the University of Kansas. He also did graduate work in theater at KU and Northwestern.


Gunn started writing SF in 1948, was a full-time freelance writer for four years, and has had nearly 100 stories published in magazines and books; most of them have been reprinted, some as many as a dozen times. He is the author of 26 books and the editor of 18; his master's thesis was serialized in a pulp magazine.

Over the River and Through the Woods (1996)
Clifford D Simak
"Without Simak, science fiction would have been without its most humane element, its most humane spokesman for the wisdom of the ordinary person and the value of life lived close to the land."
Visitors to this page also looked at these authors
James Gunn
Alan Dean Foster
Peter F Hamilton
Simon R Green
William Gibson
F Paul Wilson
Nicola Griffith
Terry Goodkind
Christopher Golden
Joe Haldeman
David Hagberg
James F David
Jacqueline Carey
Ben Bova
Robert Bloch
James Blish