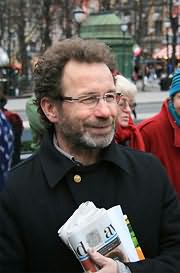 Norway (b.1952)
Per Petterson is a Norwegian novelist. Petterson's debut was Aske i munnen, sand i skoa (1987), a collection of short stories. He has since published a number of novels to good reviews. Petterson is a trained librarian. He has worked as a bookstore clerk, translator and literary critic before becoming a full-time writer. He cites Knut Hamsun and Raymond Carver among his influences. Petterson's works have been translated into almost 50 languages.

Collections
Ashes in My Mouth, Sand in My Shoes (2013)