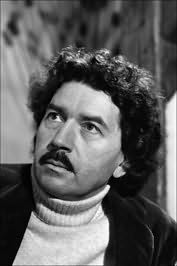 France (1922 - 2008)
Alain Robbe-Grillet was a French writer and filmmaker. He was along with Nathalie Sarraute, Michel Butor and Claude Simon one of the figures most associated with the trend of the Nouveau Roman. Alain Robbe-Grillet was elected a member of the Académie française on March 25, 2004, succeeding Maurice Rheims at seat #32.

He was married to Catherine Robbe-Grillet (née Rstakian).

Alain Robbe-Grillet was born in Brest (Finistère, France) into a family of engineers and scientists. He was trained as an agricultural engineer. In the years 1943-44 Robbe-Grillet participated in service du travail obligatoire in Nuremberg where he worked as a machinist. The initial few months were seen by Robbe-Grillet as something of a holiday, since in between the very rudimentary training he was given to operate the machinery he had free time to go to the theatre and the opera. In 1945, Robbe-Grillet completed his diploma at the National Institute of Agronomy. Later, his work as an agronomist took him to Martinique, French Guinea,Guadeloupe and Morocco.