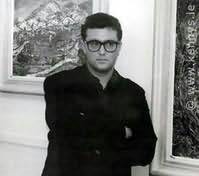 Ireland (b.1963)
Joseph O'Connor was born in Dublin. He has written thirteen books, including five previous novels: Cowboys and Indians, Desperadoes, The Salesman, Inishowen and most recently Star of the Sea, which became an international bestseller, winning the Irish Post Award for Literature, an American Library Association Award, France's Prix Millepages and the Prix Madeleine Zepter for European Novel of the Year. His work has been published in twenty-nine languages.

Skin of Dreams (2003)
Evelyn Conlon
"This is the kind of Irish novel that is all too rare."

Swallowing the Sun (2004)
David Park
"Wrenchingly affecting ... Flawed, brilliant, knotty, uncompromising, this is not an easy novel, but it is an important and beautiful one."

Hellfire (2006)
Mia Gallagher
"An audacious and wonderfully skilled writer... a novel of many pleasures."

A Line Made By Walking (2017)
Sara Baume
"After a remarkable and deservedly award-winning debut, here is a novel of uniqueness, wonder, recognition, poignancy, truth-speaking, quiet power, strange beauty and luminous bedazzlement. Once again, I’ve been Baumed."

Last Ones Left Alive (2019)
Sarah Davis-Goff
"A debut novel of jaw-dropping skill and immense power, a shimmering dystopian vision but also a lucid meditation on tenderness, intimacy and courage. From the get-go it gripped me, and since the last page I've been haunted."

The Fire Starters (2019)
Jan Carson
"Blew me away with its power, anger and wit."

Pilgrims (2020)
Matthew Kneale
"An enthralling and wonderfully vivid novel from a master storyteller."