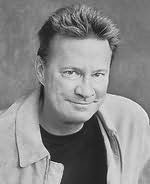 (b.1953)
T Jefferson Parker was born in Los Angeles and has lived all his life in Southern California. He was educated in public schools in Orange County, and earned a bachelor's degree in English from the University of California, Irvine, in 1976.

Only in the Ashes (1997)
(Anne Menlo, book 2)
Maxine O'Callaghan
"O'Callaghan... takes us into the extremes of evil and innocence."

The Guards (2000)
(Jack Taylor, book 1)
Ken Bruen
"The Guards blew me away. It's dark, funny and moving - just for starters. With a sharp eye and a lyrical voice, Ken Bruen takes us on a powerful odyssey through the mean streets of Galway, straight into the Irish heart. Bruen's tale is a potent draft of desire and hopelessness, conviction and surrender, inadvertent heroism and unexpected grace. This is mystery writing f a high order."

Buy Back (2010)
Brian M Wiprud
"Buy Back is Wiprud's best and biggest novel yet - his breakout book."

The Disposables (2014)
(Bruno Johnson, book 1)
David Putnam
"A dark and disturbing insider's novel that may not make you feel safer on the mean streets of L.A. Dark, disturbing and all too believable, this is the tale of one man's quest for atonement in a world where innocence is a liability."

The Benefit of Doubt (2015)
(Newberg, book 1)
Neal Griffin
"A fine debut. The police work is definitive, the emotions run high, and the hero Ben Sawyer is one you will root for."

The Driver (2017)
Hart Hanson
"Hart Hanson has given us a wonderful debut novel in The Driver."

The Return of Kid Cooper (2018)
Brad Smith
"The Return of Kid Cooper is Brad Smith at his best—clear-eyed, tough-minded and true of heart. Smith— once a farmer, signalman, truck driver, bartender, teacher and carpenter— understands that work will take its toll, even when it's the only thing holding a soul together. This is a powerful novel, fully felt and beautifully written."

High White Sun (2018)
(Sheriff Chris Cherry, book 2)
J Todd Scott
"High White Sun is a striking novel from one of the most formidable crime writers working today. J. Todd Scott captures the rough beauty of Big Bend, Texas, and the even rougher men and women living on both sides of the law. Whispers of Winslow and McCarthy sound across these pages, but the determining voice is all Scott's - specific, lyrical and keen to time and place. This is an authentic contemporary Western in the best sense of the words."

The Disappearance of Maggie Collins (2018)
Roger Angle
"NYPD Lt. Daniel Dupree is on the trail of a torture-killer of prostitutes, using his PD lover—Maggie Collins—as bait to trap the murderer. What follows is a blacker-than-noir journey through Manhattan’s one-time pit of wickedness. Steeped in sex and violence, hinting at Dupree’s redemption, this dark adventure is not for the faint of heart."

Gary Phillips' Hollis For Hire (2018)
(Nate Hollis, book 2)
Scott Adlerberg, Sarah M Chen, Phillip Drayer Duncan, Naomi Hirahara, Sara Paretsky and Gary Phillips
"Yes, this is a violent world that Nate inhabits, but he steers a true and moral course through the layers of deception, skullduggery and sometime worse that make these stories such high-density entertainment."

The Animals After Midnight (2019)
(Darby Holland, book 3)
Jeff Johnson
"What wonderful Northwest noir. Jeff Johnson cruises through Portland's underworld with a raunchy grace and an unfailing sense of black humor."

Stop at Nothing (2020)
(Michael Gannon, book 1)
Michael Ledwidge
"Stop at Nothing is a smart, brawny thriller that moves fast and surprises often. The action is tense, the characters are surely drawn, and a wonderful sense of authenticity drives the story. Best of all, the writing is assured and stylish. Stop at Nothing is a high speed roller coaster that will carry you away."