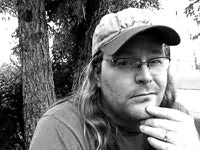 (b.1969)
Victor Gischler is the author of the Edgar-nominated Gun Monkeys as well as The Pistol Poets, Suicide Squeeze and Shotgun Opera. He now lives in the wilds of Skiatook, Oklahoma but was born and raised in Florida, attending high school in Ocala and earning his BA at the University of Central Florida in Orlando (where he minored in creative writing.) His work has been translated into French, Italian, Spanish and Japanese. A recovering academic, Victor would gladly return to teaching if he could weasel himself one of those gigs where he teaches a group of student writers in Prague or London.

Novellas
To the Devil, My Regards (2011) (with Anthony Neil Smith)

Conan
The Phantoms of the Black Coast (2014)

The Blade This Time (2017)
Jon Bassoff
"Creepy, intriguing, compelling and well-crafted, Bassoff's novel is the kind of thing you didn't realize you were looking for until you're already up to your neck in it. And by then you're hooked."