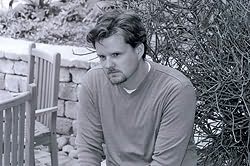 (b.1964)
James Reese was born on eastern Long Island. He attended the University of Notre Dame and the State University of NY at Stony Brook, where he received an MA in Theatre. As an undergraduate, he had a play staged off-Broadway at the Actors Repertory Theatre. While living in New York, New Orleans and Key West, Reese held various jobs in the non-profit sector, working on behalf of the arts and the environment. He has also lived and traveled extensively in France. Presently, James Reese splits his time between Paris and Tampa, Florida, and is working on a fourth novel.