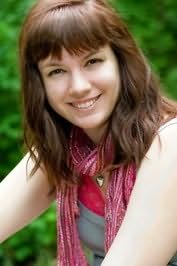 (b.1989)
Sara Raasch has known she was destined for bookish things since the age of five, when her friends had a lemonade stand and she tagged along to sell her hand-drawn picture books too. Not much has changed since then -- her friends still cock concerned eyebrows when she attempts to draw things and her enthusiasm for the written word still drives her to extreme measures.

The Crown's Game (2016)
(Crown's Game, book 1)
Evelyn Skye
"Utterly enchanting. The true wizardry is in the atmosphere—Skye crafts a Russia of magic and elegance, depicting St. Petersburg in such a breath-taking way that you’ll swear you’re standing on the banks of the Neva and dancing through the halls of the Winter Palace."

Pacifica (2018)
Kristen Simmons
"A harrowing world. Pacifica will have you breathlessly fearing our own future."

Furyborn (2018)
(Empirium Trilogy, book 1)
Claire Legrand
"Claire Legrand's Furyborn is as complex as the angels it depicts-captivating and lovely, volatile and deadly. The contrast of elegant, stately court politics with gritty, blood-soaked war is balanced perfectly alongside shifting timelines, blurred prophecies, and a sprawling cast of characters, each more alluring than the last. Furyborn is a sexy, luscious shiver of a book."

Where Dreams Descend (2020)
(Kingdom of Cards, book 1)
Janella Angeles
"[A] spellbinding melody of a book, and the true magic is how Angeles puts all the best parts of an enrapturing theatrical performance onto paper and ink. From the gripping twists in the first pages all the way to the final, heartbreaking crescendo, Where Dreams Descend will surge you to your feet in a standing ovation."
Visitors to this page also looked at these authors
Sarah J Maas
Marie Lu
J R Rain
Sabaa Tahir
Rick Riordan
Leigh Bardugo
Morgan Rhodes
Evelyn Skye
Holly Black
Kathy Reichs
Maggie Stiefvater
Alexandra Bracken
Kiersten White
Honor Raconteur
Victoria Aveyard
Annie Rains