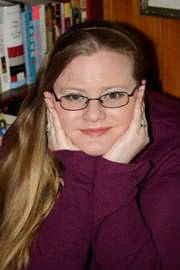 (b.1981)
Beth Revis is a NY Times bestselling author with books available in more than 20 languages. Her next title, Give the Dark my Love, is a dark fantasy about love and death. It will be available this fall. Beth’s other books include the bestselling science fiction trilogy, Across the Universe, and a novel in the Star Wars universe entitled Rebel Rising. She’s the author of two additional novels, numerous short stories,and the nonfiction Paper Hearts series, which aids aspiring writers. A native of North Carolina, Beth is currently working on a new novel for teens. She lives in rural NC with her boys: one husband, one son, and two massive dogs.

Hourglass (2011)
(Hourglass, book 1)
Myra McEntire
"Pulls your heart in every direction. A brand new twist on time travel with an explosively delicious romance."

These Broken Stars (2013)
(Starbound, book 1)
Amie Kaufman and Meagan Spooner
"Absolutely brilliant. This is the sci fi I've been waiting for!"

The Witch Hunter (2015)
(Witch Hunter, book 1)
Virginia Boecker
"Sassy and smart, this page-turning fantasy is full of action, wit, and magic. I ate it up in one sitting and demand more...now!"

And I Darken (2016)
(Conquerors Saga, book 1)
Kiersten White
"A jewel of a book—a jewel embedded in the hilt of a blood-soaked sword. A brilliantly envisioned alternate history that is meticulously detailed but compulsively readable, this is a story I could not put down. I demand the sequel like Lada demands Wallachia!"

Defy the Stars (2017)
(Defy the Stars, book 1)
Claudia Gray
"With a love story that sweeps across the galaxy and a heart-racing high-action plot, Defy the Stars brilliantly explores what it means to be human. This book shines like the stars."

Here Lies Daniel Tate (2017)
Cristin Terrill
"You will not guess the ending to this unputdownable thriller full of lies, mystery, and unexpected twists!"

The Sandcastle Empire (2017)
Kayla Olson
"The Maze Runner meets Lost in this near-future sci-fi thriller that twists and turns all the way to the heart-pounding end!"

Invictus (2017)
Ryan Graudin
"If the crew from Firefly somehow wound up as teenagers on the TARDIS and had to solve a Fringe-type mystery before time literally disappeared, you'd have something like Invictus."

Honor Among Thieves (2018)
(Honors, book 1)
Ann Aguirre and Rachel Caine
"Electrifying and unputdownable. There is no other book like this in the universe. It’s an honor (even among thieves) to share Zara’s spaceship with her."

The Final Six (2018)
(Final Six, book 1)
Alexandra Monir
"A breathtakingly real look at love, loss, and the dangers of space, THE FINAL SIX skyrockets into twists and turns I never saw coming!"

Contagion (2018)
(Contagion, book 1)
Erin Bowman
"Few understand the true horror that lies in the empty unknown of space, but Erin Bowman nails it in Contagion. Read this one with the lights on!"

Hope Never Dies (2018)
(Obama Biden Mystery, book 1)
Andrew Shaffer
"I am physically angry that this is a work of fiction. If I'm ever murdered, please put Joe Biden on the case."

Sky Without Stars (2019)
(System Divine, book 1)
Jessica Brody and Joanne Rendell
"Les Miserables like you've never seen it before--this page-turning story rockets the classic through the stars and into your heart."

Goddess in the Machine (2020)
Lora Beth Johnson
"Utterly inventive and unique, this story has more surprises in store for you than you can imagine."