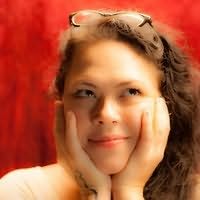 Amy Sumida is the Internationally Acclaimed author of the Award-Winning Godhunter Series, the fantasy paranormal Twilight Court Series, the Beyond the Godhunter Series, the music-oriented paranormal Spellsinger Series, and several short stories. Her books have been translated into several languages, have made it to the top sellers list on Amazon numerous times, and the first book in her Spellsinger Series won a publishing contract with Kindle Press.
She was born and raised in Hawaii, and brings her unique island perspective to all of her books. She doesn't believe in using pen names, saving the fiction for her stories. She's know for her kick-ass heroines who always have a witty comeback ready, and her strong, supporting male characters who manage to be sensitive and alpha all at once.
All she's ever wanted to do, since she was a little girl, was to write novels. To be able to do so for a living is a blessing which she wakes up thankful for every day. Beyond her books, she enjoys collecting toys, to keep herself young, and cats, to keep herself loved