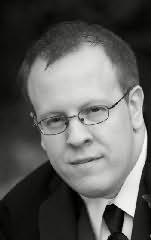 (b.1970)
When not plotting against his mortal enemy Patrick Rothfuss, Anton Strout is the author of the Simon Canderous urban fantasy series for Ace Books including Dead To Me, Deader Still, Dead Matter and Dead Waters.
His new series with Ace Books is entitled The Spellmason Chronicles. Alchemysticis first in the series, followed by Stonecast and the upcoming Incarnate.

He is also the host and curator of content for The Once & Future Podcast, a weekly show that focuses on discussions with other working writers.

His other writing has appeared in a variety of anthologiessome of which include Simon Canderous tie-in storiesincluding: Boondocks Fantasy, The Dimension Next Door, A Girls Guide to Guns & Monsters, Pandoras Closet, Spells of the City, and Zombie Raccoons & Killer Bunnies, Spells of the City, Boondocks Fantasy, After Hours: Tales from the Ur-Bar, and the upcoming Human For A Day.

He currently lives outside New York City in the haunted corn maze that is New Jersey (where nothing paranormal ever really happens, he assures you). In his scant spare time, he is an always writer, sometimes actor, sometimes musician, occasional RPGer, and the worlds most casual and controller-smashing video gamer. He also works in the exciting world of publishing, and yes, it is as glamorous as it sounds.

Deadtown (2009)
(Deadtown, book 1)
Nancy Holzner
"DEADTOWN is a perfect blend of mystery, fantasy, humor and even modern-day social issues. It's Boston as you've never seen it . . . where the shapes shift, the zombies gnaw, and the blood flows warm through the oh-so-delicious veins of the area known as Deadtown. Victory Vaughn gives evil a run for its money."