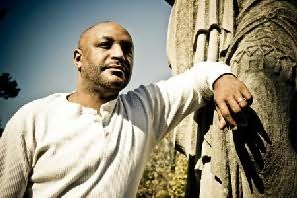 Jamaica
Maurice Broaddus graduated in 1993 from Indiana University-Purdue University at Indianapolis and holds a Bachelor's of Science degree in Biology (with an undeclared major in English). He works as an environmental toxicologist for a local firm, Commonwealth Biomonitoring. He comes from a family that includes several practicing obeah (think: Jamaican voodoo) people, but is now the facilitator for the church.

Irredeemable (2014)
Jason Sizemore
"These short stories are like 18 shots in a chamber. No matter how you spin the barrel, you will end up with a live round. His stories are dark, powerful, and unsettling."

Lost Gods (2018)
(Lost Gods , book 1)
Micah Yongo
"Lost Gods is a fully immersive experience which made me a fan again. It made me seriously take my time, soak in its prose, get lost in this fully realized, rich and vital world, and get whisked along in its adventure. Micah Yongo pays respect to his elders, like Charles Saunders, while defining a space for himself in the pantheon of great sword & sorcery (sword & soul!). He is a griot, a true storyteller, coming into his own."

The Black God's Drums (2018)
P Djèlí Clark
"This mashup of history and culture has been perfectly distilled into a world fully realized and authentic. AU-THEN-TIC. Down to the sounds and tastes. Clark is a griot of the first order and The Black God's Drums is a call from the ancestors, an invitation to join in with them to celebrate story."
Visitors to this page also looked at these authors
Ben Aaronovitch
Brian D Anderson
Angus Wells
Barry Hughart
Simon Louvish
Anthony Horowitz
Jerry Ahern
Lloyd Alexander
Morgan Llywelyn
Michael Scott
Allen Steele
Isabel Allende
Eric Ambler
Barbara Hambly
Barb Hendee
Caitlín R Kiernan