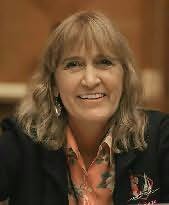 (1956 - 2007)
Barbara Seranella was born in Santa Monica, California and grew up in Pacific Palisades. After a restless childhood that included running away from home at 14, joining a hippie commune in the Haight, and riding with outlaw motorcycle clubs, she decided to settle down and do something normal so she became an auto mechanic.

She worked at an Arco station in Sherman Oaks for five years and then a Texaco station in Brentwood for another twelve. At the Texaco station, she rose to the rank of service manager and then married her boss. Figuring she had taken her automotive career as far as it was going to carry her, she retired in 1993 to pursue the writing life.