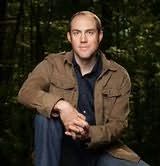 Brian Staveley is the author of The Emperor's Blades, first book of the epic fantasy trilogy.

Brian has taught literature, religion, history, and philosophy, all subjects that influence his novels, and holds an MA in Creative Writing from Boston University. He works as an editor for Antilever Press, and has published poetry and essays, both in print and on-line. He lives in Vermont with his wife and young son, and divides his time between running trails, splitting wood, writing, and baby-wrangling.

The Mirror Empire (2014)
(Worldbreaker Saga, book 1)
Kameron Hurley
"The Mirror Empire is epic in every sense of the word. Hurley has built a world - no, worlds - in which cosmology and magic, history and religion, politics and prejudice all play crucial roles. Prepare yourself for sentient plants, rifts in the fabric of reality, and remarkable powers that wax and wane with the stars themselves. Forget all about tentative, conventional fantasy; there's so much great material in here that Hurley needs more than one universe in order to fit it all in."