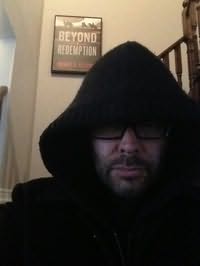 Canada
Michael R. Fletcher is a science fiction and fantasy author. His novel, Beyond Redemption, a work of dark fantasy and rampant delusion, is being published by HARPER Voyager and is slated for release June 16th, 2015.

His début novel, 88, a cyberpunk tale about harvesting children for their brains, was released by Five Rivers Publishing in 2013. 88 is available from Amazon, Barnes and Noble, Kobo, and elsewhere.

The next two Manifest Delusions novels, THE ALL CONSUMING, and WHEN FAR-GONE DEAD RETURN are currently in various stages of editing while Michael tries to be the best husband and dad he can be.

Michael is represented by Cameron McClure of the Donald Maass Literary Agency.

Collections
A Collection of Obsessions (2019)