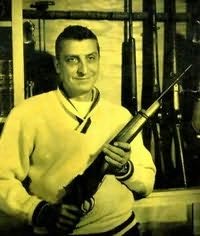 (b.1922)
Connie Leslie Sellers was born in Shubuta, Mississippi. In 1943 he married Mary Raineri in New Orleans, Louisiana. They are the parents of two sons, Leonard and Shannon. Sellers was a much-decorated Korean War veteran. He received prestigious medals not only from the United States, but also from the countries of France, England, and the Republic of Korea. Sellers was also awarded the Korean Medal from the United Nations.

It was while he was a soldier that Sellers began to write. He edited Army newspapers and served as a combat correspondent during the Korean War. He used his experiences in the Army to flavor his early short stories and poetry. After leaving the Army, Sellers began writing in earnest. His first published works were macho short stories and articles he wrote for men's magazines. He then wrote low grade novels that often included sexually liberal content for the times. In the 1960's, under the name of Robert Crane, he wrote a series of adventure novels about the Korean War that were mildly successful. He also wrote a screenplay, Too Late the Hero and the novel, Dallas; inspired by the television series by the same name. Over the years, Sellers wrote more than 230 novels, under 94 names, both female and male, including a few under his own name.