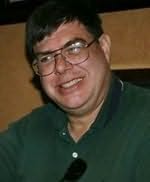 (b.1952)
Larry Bond is the author of numerous New York Times bestselling thrillers, including Vortex, Cauldron, and The Enemy Within. He previously worked with Jim DeFelice on the Larry Bond's First Team series. A former Naval Intelligence officer, warfare analyst and anti-submarine technology expert, he makes his home in Springfield, Virginia.

Executive Treason (2005)
(Scott Roarke, book 2)
Gary Grossman
"As topical as tomorrow's Internet blog ... fast-paced, with vivid characters and a plot right off the front pages. Surprises you on every page. A winner."

Ruins of War (2015)
(Mason Collins, book 1)
John A Connell
"A well-crafted, classic police tale set in postwar 1945 Munich, a city that could double as the living room of hell...Mason's pursuit of the madman takes him through a ruined landscape filled with inhabitants as shattered as the city they live in."

Fast Shuffle (2015)
David Black
"David Black uses an artist's touch in creating a story, and a master's skill in telling it."