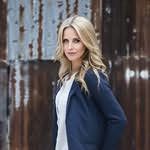 Sweden (b.1979)
Emelie Schepp was born in 1979 and grew up in Motala. She has worked for many years as a project manager in the advertising industry.
The written word has always been close to her heart and in 1998 she won first prize in the Östergötland Theatre's drama prize "Meetings". Since then she has written two feature screenplays and two crime novels set in Norrkoping. Marked for life became her first book in 2013 that she first gave out self-published, and with over 40,000 copies sold Schepp ranked as Sweden's leading private publisher. Marked for life is the first part in the series about prosecutors Jana Berzelius. The book became a sensation and today has sold close to 200,000 copies. Marked for life became Sweden's sixth best-selling e-book in 2014 (Swedish bookstore), the year's best-selling audio book in 2015 (Swedish Bookstore) and was nominated for the Swedish Audiobook Prize. Sequel White tracks released in May 2015 and has long topped the sales charts. Even the White tracks have been nominated to the Great Audiobook Prize. The series of Jana Berzelius is sold to twenty-five countries around the world.