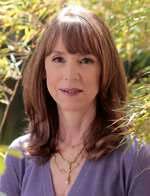 (b.1955)
Lisa See is a Chinese American writer and novelist. The Chinese side of her family has had a great impact on her life and work.Her books include On Gold Mountain: The One-Hundred-Year Odyssey of My Chinese-American Family (1995) and the novels Flower Net (1997), The Interior (1999), Dragon Bones (2003), Snow Flower and the Secret Fan (2005), Peony in Love (2007) and Shanghai Girls (2009), which made it to the 2010 New York Times bestseller list. Both Shanghai Girls and Snow Flower and the Secret Fan received honorable mentions from the Asian/Pacific American Awards for Literature.Flower Net, The Interior, and Dragon Bones make up the Red Princess mystery series. Snow Flower and the Secret Fan and Peony in Love focus on the lives of Chinese women in the 19th and 17th centuries respectively.See's latest novel, Shanghai Girls (2009), chronicles the lives of two sisters who come to Los Angeles in arranged marriages and face, among other things, the pressures put on Chinese-Americans during the anti-Communist mania of the 1950s.

War Trash (2004)
Ha Jin
"Ha Jin's historical novel about Chinese prisoners held during the Korean War couldn't be more topical. In telling this story from the loser's perspective, he has called upon all of his wonderful and impressive skills as a writer. He never shies away from the degradation of the prisoners, while at the time revealing small humanities that happen in even the most desperate of circumstances."

God of Luck (2007)
RuThanne Lum McCunn
"Beautifully combines the hardships and brutality of the kidnapping of a Chinese man, conditions on the slave ships, and the bitterness of backbreaking labor in a foreign land with the sadness and determination of a wife and family back home. . . . A story of emotional depth and truth."

The Street of a Thousand Blossoms (2007)
Gail Tsukiyama
"Tsukiyama has long been known for her emotional and detailed stories. This time, she has gone even deeper to explore what happens to ordinary people during fightening and tragic times."

Wingshooters (2011)
Nina Revoyr
"Nina Revoyr is one of my favorite writers . . . Wingshooters is a gem of a novel filled with beautiful language, thoughtful observations on life, deep heartache, and determined acceptance."

A Concubine for the Family (2012)
Amy Kwei
"I really enjoyed the story."

Lilac Girls (2016)
(Caroline Ferriday, book 1)
Martha Hall Kelly
"Inspired by actual events and real people, Martha Hall Kelly has woven together the stories of three women during World War II that reveal the bravery, cowardice, and cruelty of those days. This is a part of history that should never be forgotten."

I Liked My Life (2017)
Abby Fabiaschi
"An emotional journey of love, loss, healing, and redemption. I rooted for every character."

The History of Bees (2017)
Maja Lunde
"The History of Bees is spectacular and deeply moving. Lunde has elegantly woven together a tale of science and science fiction, dystopia and hope, and the trials of the individual and the strengths of family."

Montauk (2019)
Nicola Harrison
"You don't have to go to Montauk to enjoy the beach. In this lovely debut novel, Nicola Harrison brings the beach to you, along with its people, its mores, and its contradictions. I so enjoyed Montauk, and I look forward to many more novels by Nicola Harrison."

The Library of Legends (2020)
Janie Chang
"Janie Chang has beautifully melded history and the spirit world to create an adventurous love story for all of us readers who love books and who, in a perfect world, would do anything to save them."

What Could Be Saved (2021)
Liese O'Halloran Schwarz
"What Could Be Saved transported me. Liese O'Halloran Schwarz's exquisite and memorable writing has me still thinking about the ways in which the past influences the present, the complexities of family life, and the ways we negotiate challenges, tragedies, and secrets."
Visitors to this page also looked at these authors
Lisa Scottoline
James Patterson
Karin Slaughter
Daniel Silva
Douglas Preston
Nora Roberts
Amy Tan
Diane Setterfield
John Grisham
John Sandford
Jeff Shaara
Michael Connelly
Danielle Steel
Jodi Picoult
Kristin Hannah
David Baldacci