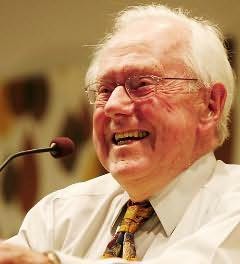 (b.1922)
Ferrol Sams has been a very influential author and continues to do so in his life. From humble beginnings he started and is what helped him to master the skills he now has. He has created many fantastic books ranging from novels to short stories, to even biographies. This man was an altogether intelligent person to be able to have gone to a medical college, gotten a degree, and still have plenty of time left over to write stories. He truly represents to all "southerness" at its finest. For his medical training he attended Emory University, a very prestigious school in the south; it was at this school that he met his future wife. Once he and his wife Helen were married, they opened up private physician's offices and eventually would found the Fayette medical center.

At age sixty Sams began to write, and eventually publish, the first of his almost biography adventures featuring a young man named Porter Osborne Jr. He continued to write in this "biography" series using his experiences that he gained by living in rural Fayette County. He originally wanted to share about his childhood with his grandchildren by making these biographies.
Series
Porter Osborne, Jr
1. Run with the Horsemen (1982)
2. The Whisper of the River (1984)
3. When All the World Was Young (1992)

Omnibus
Run With the Horsemen / Whisper of the River (1992)