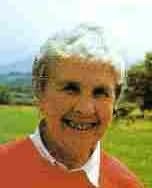 (1924 - 2007)
Joyce Stranger trained as a biologist, specialising in animal behaviour, and tried her hand at dog training too. Not surprisingly, animal themes, especially relationships between human and animal feature in all of her books. She thought that the human-animal/human-nature relationship was extremely important and that a co-existence between the two could improve quality of life. She said "for many people an animal can provide a harmony lacking in day-to-day relationships with people."

Her books are not very anthropomorphic, deliberately so. She thought that many animal books, especially childrens were inaccurate or sentimental or humanised the animal and wanted her stories instead to "show how animals live in a world that is real to them"

They are definitely not sentimental either, many are quite downbeat. Disasters often strike her fictional worlds and her characters are often unhappy, guilt-stricken or remorseful. However they usually end on a more upbeat and optimistic note.

Ms. Stranger was one of the few authors to write horse stories aimed at adults. Most of her pony books are either adult or teenage stories.