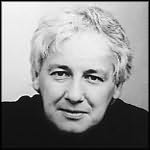 (b.1957)
Nicholas Shakespare is the author of The Vision of Elena Silvers(1989), winner of the Somerset Maugham Award, The High Flyer, for which he was nominated for the Grants list in 1993 and The Dancer upstairs which was chosen by the American Libraries Association as the best novel of 1997. In 1999 his biography, Bruce Chatwin was published to great critical acclaim.

The Virago Book of Love Letters (1994)
Jill Dawson
"The letters which catch the reader's heart are those framed by the drama of an impossible or illicit passion."