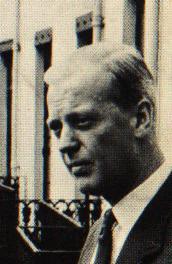 aka Eliot Reed
Eric Ambler began his writing career in the early 1930s, and quickly established a reputation as a thriller writer of extraordinary depth and originality. He is often credited as the inventor of the modern political thriller and John Le Carré once described him as 'the source on which we all draw.'

Ambler began his working life at an engineering firm, then as a copywriter at an advertising agency, while in his spare time he worked on his ambition to become a playwright. His first novel was published in 1936 and as his reputation as a novelist grew he turned to writing full time. During the war he was seconded to the Army Film Unit, where he wrote, among other projects, The Way Ahead with Peter Ustinov.

He moved to Hollywood in 1957 and during his eleven years there scripted some memorable films, including A Night to Remember and The Cruel Sea, which won him an Oscar nomination.

In a career spanning over sixty years, Eric Ambler wrote nineteen novels and was awarded the Crime Writers' Association Gold Dagger Award for Passage of Arms in 1960. He was married to Joan Harrison, who wrote or co-wrote many of Alfred Hitchcock's screenplays - in fact Hitchcock organized their wedding. Eric Ambler died in London in October 1998.

Genres: Mystery
Series
Charles Latimer
1. The Mask of Dimitrios (1937)
aka A Coffin for Dimitrios
2. The Intercom Conspiracy (1969)
aka Quiet Conspiracy

Anthologies edited
To Catch a Spy (1964)

The Miernik Dossier (1971)
(Paul Christopher, book 1)
Charles McCarry
"It is ages since I enjoyed anything as much . This is the most intelligent and enthralling piece of work I have read for a very long time. The level of reality it achieves is high indeed; it is superbly constructed, wholly convincing, and displays insights that are distinctly refreshing. A new and very welcome talent."
Visitors to this page also looked at these authors
Margery Allingham
Jeffrey Archer
M J Arlidge
Dan Ames
Jonathan Ames
Susan Wittig Albert
Bruce Alexander
Kate Atkinson
Rachel Amphlett
Isabel Allende
Peter Ackroyd
Jane A Adams
Donna Andrews
Steve Alten
John Le Carré
Megan Abbott