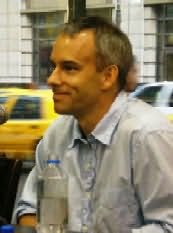 Scott Smith is an American author and screenwriter and is a graduate of Columbia University. He has published two suspense novels, A Simple Plan and The Ruins. His screen adaptation of A Simple Plan earned him an Academy Award nomination. Smith's second novel, "The Ruins", is now a horror film and was released April 4th, 2008.
Novels
A Simple Plan (1993)
The Ruins (2006)

The Girl Who Would Speak for the Dead (2011)
Paul Elwork
"If writing can be thougt of as a sort of telepathy - a rousing and rendering of spirits - then Elwork is as talented a clairvoyant as any you're ever likely to encounter."

The Troop (2014)
Nick Cutter
"Lean and crisp and over-the-top....Disquieting, disturbing,"

Tin Men (2015)
Christopher Golden
"Tin Men is the literary equivalent of a muscle car: stylish and fast-paced, with a hopped-up engine of a plot. Christopher Golden starts things off at tire-burning speed and never lets up. It’s a great ride—definitely as much fun as we can ever hope to have while the world falls to ruin around us."

Seance Infernale (2017)
Jonathan Skariton
"Seance Infernal is a menacing Gothic nightmare, a love letter to the dawn of cinema, to the ghost-ridden city of Edinburgh, and to the golden age of pulp fiction. There are subterranean tunnels and immolations; there's knife play and gunfire, alchemy and patent theft. It's a whipsaw ride, but always good, giddy fun."

The Salt Line (2017)
Holly Goddard Jones
"The Salt Line is a 'literary thriller' that manages to fulfill each side of that phrase with admirable vigor. It's both gripping and emotionally resonant, both suspenseful and heartfelt. Holly Goddard Jones has a true storyteller's instinct for suspense, along with a deep gift for empathy. She’ll make your heart race as you turn the pages, and then she'll crack it open a little before she's through."

Glimpse (2018)
Jonathan Maberry
"With Glimpse, Jonathan Maberry carries us into the fertile liminal zone between waking and dreaming. Monsters dwell there, but so do some unexpected heroes, and none is more unexpected than the tragically damaged Rain Thomas. Rain has been living her life just one small drop of hope away from hopelessness, yet it's upon her slender and storm-tossed frame that Maberry hangs the fate of his world. She's a poignant creation, and it's impossible not to root for her as she makes her way through this wonderful (and wonder-filled) nightmare of a book."

Bearskin (2018)
James A McLaughlin
"Bearskin—a gripping tale written in spare, beautiful prose—tells the tale of Rice Moore, a reluctant hero, competent, resilient, and utterly engaging. McLaughlin is a gifted storyteller, and Bearskin is a remarkable debut."

Foe (2018)
Iain Reid
"Foe is a tale of implacably mounting peril that feels all the more terrifying for being told in such a quiet, elegantly stripped-down voice. Iain Reid knows how to do 'ominous' as well as anyone I’ve ever read."

The Stranger Game (2018)
Peter Gadol
"The Stranger Game is a sharp-toothed commentary on the ways in which 'following' can foster a pretense of intimacy between strangers, and how the falsity of this intimacy—its utter lack of substance—often creates a perilous hunger for more: more access, more communion, more knowledge. It’s also a fun, moody, twisty thriller, with a sun-touched, West Coast vibe...as much Joan Didion as Patricia Highsmith."

The Toast (2018)
Matt Marinovich
"The Toast is stupendous - as brief, urgent, and bracing as a punch to the face. It’s gripping, funny, and unrelentingly bleak (in the best possible way). Matt Marinovich has such a sinister and uncompromising sensibility that one can feel a little morally compromised for enjoying his work so much. If that’s the case, though, I must be a very bad person indeed, because I absolutely loved this book."