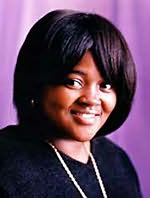 (b.1964)
Born in Bronx, New York, raised in the projects, Souljah is a fighter who came up from the bottom. A graduate of Rutgers University, she earned a degree in American History and African Studies. She also attended the Cornell University Advanced Placement Studies, and studied abroad in Europe at the University of Salamanca.

A global student, Sister Souljah traveled throughout her college years to England, France, Spain, Portugal, Finland, and Russia. Her academic accomplishments were reinforced with first hand experiences. She worked to build a medical center for families in Bindura, Zimbabwe. She worked with refugee children from Mozambique. A major participant in the international student anti-aparthied movement, she helped to create a momentum, movement and fervor which liberated Nelson Mandela and brought about the divestment of millions of dollars from corporations doing business with apartheid South Africa. Her travels in Africa also included Zambia and South Africa. She believes it is essential that African professionals help one another to save our continent , resources, families, and children.