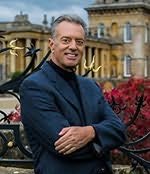 aka Thomas Locke, Cameron Wolfe
Born and raised in North Carolina, Davis left for Europe at age twenty. There he first completed graduate studies in economics and finance, then began a business career that took him to over forty countries in Europe, Africa, the Middle East and Asia.Davis came to faith at age 28, while living in Germany and running an international business advisory group. He started writing two weeks later. Since that moment, writing has remained both a passion and a calling.Davis wrote for nine years and completed seven books before his first was accepted for publication. During that time, he continued to work full-time in his business career, travelling to two and sometimes three countries every week. His first published book, The Presence, was released in 1990 and became a national bestseller.A sought-after speaker in the art of writing, Davis serves as Writer In Residence at Regent's Park College, Oxford University.

The Salt Garden (2004)
Cindy Martinusen-Coloma
"I am most impressed."