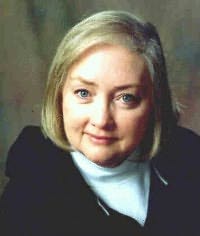 A fifth-generation Texan who taught family living, Jodi Thomas chooses to set the majority of her novels in her home state, where her grandmother was born in a covered wagon.

With a degree in Family Studies, Thomas is a marriage and family counselor by education, a background that enables her to write about family dynamics. Honored in 2002 as a Distinguished Alumni by Texas Tech University in Lubbock, Thomas enjoys interacting with students on the West Texas A & M University campus, where she currently serves as Writer In Residence.

When not working on a novel or inspiring students to pursue a writing career, Thomas enjoys traveling with her husband and renovating an historical home they bought in Amarillo. TEXAS RAIN, the first book in her latest historical "Whispering Mountain" series, was released in November 2006. TEXAS PRINCESS, the next novel in the series was published in November 2007. An anthology of short stories, GIVE ME A TEXAN, will be available in February 2008. Her newest mainstream novel, TWISTED CREEK, is garnering rave pre-release reviews and is set for release in April 2008.

Collections
Ask Me Why (2015) (with Marie Force, Shirley Jump and Virginia Kantra)
Once Upon a Valentine's Day (2017) (with Stella Bagwell, B J Daniels, Lori Foster, Rhenna Morgan and Maisey Yates)
A Texas Kind of Christmas (2019) (with Celia Bonaduce and Rachael Miles)
The Cowboy Who Saved Christmas (2020) (with Scarlett Dunn and Sharla Lovelace)

The Cowboy Who Came Calling (2003)
(Texas Heroes , book 2)
Linda Broday
"Linda Broday's heroes step right out of her books and into your heart."

Before and Ever Since (2012)
(What Happens in Texas, book 2)
Sharla Lovelace
"A writer with a fresh new voice."

Caught Up in a Cowboy (2018)
(Cowboys of Creedence, book 1)
Jennie Marts
"Funny, complicated, and irresistible."

Song for a Cowboy (2021)
(Kings of Country, book 2)
Sasha Summers
"A hot romance and a fast galloping plot."