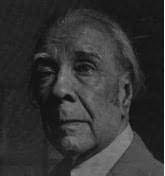 aka H Bustos Domecq
Jorge Luis Borges was born in Buenos Aires, Argentina. As a poet, essayist, and short-story writer, he became one of the first Latin American writers to achieve international fame.

He is one of the seminal figures in twentieth-century literature. His influence on the art of narrative and on the very way people think about writing has been incalculable. All postwar fiction, from Gabriel García Márquez to Carlos Fuentes, John Updike to John Barth, Italo Calvino to Umberto Eco, bears Borges's imprint - in spite of the fact that Borges did not write a single novel.
Novels
Six Problems for Don Isidro (1942) (as by H Bustos Domecq)

Books about Jorge Luis Borges
With Borges (2004) by Alberto Manguel

The Marquis of Bolibar (1926)
Leo Perutz
"A perfect example of the novel of the fantastic in its purest form."