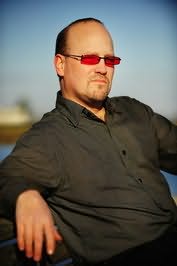 Toby's stories have been praised by Midwest Book Review, Library Journal and Cemetery Dance as well as by New York Times bestselling authors Steve Berry, Douglas Preston, Jonathan Maberry and Steve Alten. He has been featured in The Big Thrill magazine and on Internet radio, blogs and newspapers.

Inexplicably drawn to all things dark and macabre, at about the age of twelve he began penning short stories and publishing his own movie monster magazine.

An Air Force brat who never lived in one place more than two years, after high school Toby did an eight-year stint in the U.S. Navy and ended up on the east coast. He has since worked as a cab driver, a pizza delivery man, a phone solicitor, a shipyard technician, a government contractor, a retail music salesman, a bookseller, a cell phone salesman and a recording studio engineer.

Toby later earned a B.A. in English and became a full-time graphic designer and newspaper reporter, publishing hundreds of stories with the Associated Press and his local paper. He has since been published in The Pedestal Magazine, Voluted Tales magazine, Famous Monsters of Filmland, Scary Monsters Magazine, and websites like eHow.com.

Owing to the inspiration of Edgar Rice Burroughs, Ray Bradbury and Stephen King, Toby became an author of what he likes to call "high-octane sci-fi, fantasy and horror" and has published several books.

Toby is also a songwriter and musician and lives with his family near the Great Dismal Swamp in northeastern North Carolina.