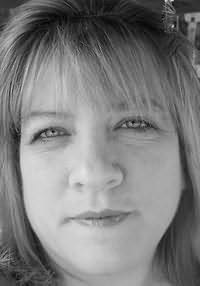 Gloria White has written six crime novels and has been a finalist for the EDGAR, SHAMUS and ANTHONY Awards on a number of occasions.

Like her protagonist, she lives in San Francisco and is bi-cultural (Puerto Rican/Anglo). Being of two cultures is hard to explain but one interesting aspect is that in essence, one belongs to both worlds and yet to neither. Who better to personify a contemporary rendition of the classic lone wolf private eye? Thus Gloria's protagonist, Veronica "Ronnie" Ventana, was born and in a nod to San Francisco demographics, Ronnie was born Mexican/Anglo. Ventana is, according to Publisher's Weekly, "an appealing protagonist who engages in intelligent, stylish sleuthing." Ronnie is a rule-bending P.I. whose deceased parents were cat burglars and who herself is a professional at compromising burglar alarm systems--only she calls it "security consulting." Her mentor and sidekick is the handsome but grizzled ex-boxer turned private eye, Blackie Coogan, who despite his advanced years is a chick magnet of major proportions.

In addition to being twice honored as an EDGAR Award finalist, the series' other nominations include two SHAMUS (Private Eye Writers of America) and two ANTHONYs (Worldwide Bouchercon Convention). The audio book version of MURDER ON THE RUN was named an AUDIO BEST OF THE YEAR by Publishers Weekly.
Series
Ronnie Ventana
1. Murder on the Run (1991)
2. Money to Burn (1993)
3. Charged With Guilt (1995)
4. Sunset and Santiago (1997)
5. Death Notes (2004)
6. Cry Baby (2006)