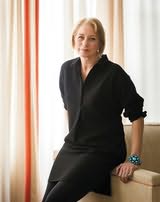 (b.1959)
Laura Lippman was a reporter for twenty years, including twelve years at The (Baltimore) Sun. She began writing novels while working full-time and published seven books about “accidental PI” Tess Monaghan before leaving daily journalism in 2001.

The Flower Master (1999)
(Rei Shimura, book 3)
Sujata Massey
"Her best yet. Intricate plotting and writing as beautiful as the ikebana described herein."

Delusion (2002)
(Dr Peter Zak, book 3)
G H Ephron (Donald A Davidoff)
"A terrific series. Delusion offers up all the pleasures we have come to expect - the wonderfully human protagonist of Zak, a twisty plot, and incisive writing."

The Only Suspect (2005)
Jonnie Jacobs
"A riveting, twisty and very timely read. You won't be going anywhere until you find how this one ends."

A Welcome Grave (2007)
(Lincoln Perry, book 3)
Michael Koryta
"With the publication of A Welcome Grave, it's time to stop referring to Michael Koryta as a boy wonder and just focus on the sheer wonder of his storytelling. Koryta knows how to put his characters---and his readers---into an ever-tightening vise of twists, turns, and conspiracies, but it's his empathy that makes his work stand out. This is a nuanced, mature novel that proves both the depth of Koryta's talent and the vitality of the PI genre."

Walla Walla Suite (2007)
(Quinn , book 2)
Anne Argula
"This book will delight anyone who has ever feared that the private detective novel has no new tricks - or voices - up its sleeve."

When One Man Dies (2007)
(Jackson Donne Mystery, book 1)
Dave White
"White manages the neat trick of respecting the genre's traditions while daring to nudge it toward something new and unexpected."

The Other Half Lives (2009)
(Culver Valley Crime, book 4)
Sophie Hannah
"An elegant snake of a book, twisting and turning, delighting the reader on every page. Sophie Hannah is a prodigious talent - I can't wait to see what she does next."

Cemetery Road (2009)
Gar Anthony Haywood
"Cemetery Road is the kind of novel that only a seasoned writer can bring us."

Next (2010)
James Hynes
"One of the most surprising, delightful, compulsively readable, and ultimately profound novels I've read in some time."

Print the Legend (2010)
(Hector Lassiter, book 8)
Craig McDonald
"The competition for the future of crime fiction is fierce, but don't take your eyes off Craig McDonald. He's wily, talented and -- rarest of the rare -- a true original.  I am always eager to see what he's going to do next."

Cold Shot to the Heart (2011)
(Crissa Stone, book 1)
Wallace Stroby
"Just when you think that you can't be surprised anymore, a writer like Wallace Stroby ups the ante."

Devils And Dust (2015)
(Jack Keller, book 4)
J D Rhoades
"Rhoades' star is raising almost as fast as his own rocket across the page."

Down the Darkest Street (2016)
(Pete Fernandez, book 2)
Alex Segura
"So many writers have tried to reinvent the PI novel in recent years that it's refreshing to be reminded it was never broken. DOWN THE DARKESTSTREET is classic PI fiction in the best sense, with a vibrant settingand a character who's so much more than the sum of his flaws."

November Road (2018)
Lou Berney
"Lou Berney has quickly become one of crime fiction’s stand-outs, a quietly subversive writer who can surprise the most jaded readers. NOVEMBER ROAD delivers everything we have come to expect from him -- and then some."

Miracle Creek (2019)
Angie Kim
"Miracle Creek is a marvel, a taut courtroom thriller that ultimately tells the most human story imaginable, a story of good intentions and reckless passions. Compelling, generous, at once empathetic and unsparing. I am wrecked, I am heartened and hopeful, which means, in short, that Miracle Creek is pretty much the perfect novel for these chaotic times in which we live."