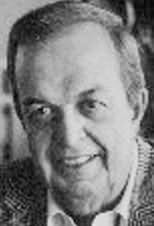 aka Oliver Bleeck
Before he began writing novels in 1965, Ross Thomas was a reporter, foreign correspondent and public relations executive in the United States, Europe and Africa. He was the author of over twenty novels including the award-winning COLD WAR SWAP. He died in 1995.

Hammett (1975)
Joe Gores
"Not since Hammett and Chandler has anyone written quite as well as Joe Gores."