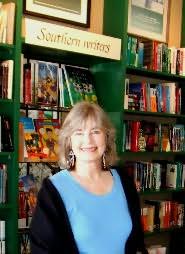 (b.1942)
You name it and multi-talented, award-winning, best-selling novelist Peggy Webb has written it – magazine humor columns, romance, quasi-literary women’s fiction and now comedy/mysteries. The first book of her new Callie Valentine & Elvis mystery series will be published in the summer of 2008 in hardcover from Kensington.

She likes to describe herself as “Southern to the bone and a pillar of the church and community,” but her friends say she is as down-to-earth and zany as the characters in her books. She readily admits to being part Callie in Elvis and the Dearly Departed (2008) and part Maggie in her Pulitzer nominated novel Driving Me Crazy (2006), which also features the delicious Rainman. But she denies being the model for characters in Flying Lessons (2006), Late Bloomers (2007) and particularly Confessions of a Not-So-Dead Libido.

Omnibus
Silhouette Christmas Stories, 1991 (1991) (with Phyllis Halldorson and Heather Graham Pozzessere)
Angels on Zebras / Someone to Watch Over Me / Your Place or Mine? / Show Me the Way (1998) (with Cynthia Powel)
Summer Surrender (2004) (with Maureen Child)
Christmas Feast / Make-Believe Mistletoe (2004) (with Gina Wilkins)
Like Mother, Like Daughter (But in a Good Way) (2007) (with Jennifer Greene and Nancy Robards Thompson)
Men Made In America Mega-Bundle 2 (2007) (with Annette Broadrick, Bethany Campbell, Allison Leigh, Anne McAllister and Ingrid Weaver)
Hard to Resist (2010) (with Jean Brashear)
Finding Mr. Perfect (2013)
Finding Paradise (2013)
Time's Embrace (2014)
When I Found You (2014)

Collections
The Rules of Engagement (2017)