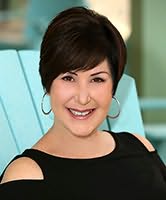 A native of St. Petersburg, Florida, Wendy read voraciously as a child, was a regular at her local library, and became fast friends with Nancy Drew and Anne of Green Gables. Her love affairs with language and storytelling paid off beginning with her first shift at the campus radio station while studying journalism at the University of Georgia.

After returning to her home state and graduating from the University of South Florida she worked for the Tampa PBS affiliate, WEDU-TV, behind and in front of the camera. Her resume includes on air work, voiceovers and production of a variety of commercial projects and several feature films. She may be best known in the Tampa Bay area as the host of Desperate & Dateless, a radio matchmaking program that aired on WDAE radio, and nationally as host of The Home Front, a magazine format show that aired on PBS affiliates across the country.

Good Karma (2017)
Christina Kelly
"Quirky and entertaining. A cleverly written reminder that it's never too late to fall in love or become the person you're meant to be."