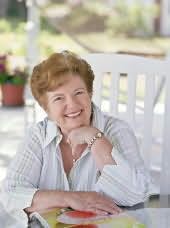 aka Alexandra Kirk, Suzanne Sherrill
Sherryl Woods was born on July 23, 1944 in Arlington, Virginia, U.S.A. She graduated from Ohio State University with a degree in Journalism and worked for several newspapers covering everything from suburban government to entertainment. Eventually specializing in television, she became the television editor for papers in Ohio and Florida.

By 1986, she was writing full-time. Well over 100 books later, however, this prolific author still believes that. It is why she continues to love the genre. In addition to her more than 75 romances for Silhouette Desire and Special Edition, she has written thirteen mysteries — nine in the Amanda Roberts series and four in the Molly DeWitt series.

When she's not writing or reading, Sherryl loves to garden, though she's not at her best on a riding lawn mower. She also loves tennis, theater, and ballet, even though her top spin has long since vanished, she's never set foot on a stage, and she's way too uncoordinated to dance. She also loves baseball and claims anyone who's ever seen Kevin Costner in "Bull Durham" can understand why.
Genres: Romance, Romantic Suspense

Series contributed to
Circle of Love (as by Alexandra Kirk)
18. Sand Castles (1982)

Always A Bridesmaid
Finally a Bride (1995)

No River Too Wide (2014)
(Goddesses Anonymous, book 3)
Emilie Richards
"Complex characters, compelling emotions and the healing power of forgiveness-what could be better. I loved this book!"

Ever After at Sweetheart Ranch (2015)
(Valentine Valley, book 7)
Emma Cane
"Strong families, deep friendships, and sexy heroes abound in Valentine Valley. I'd love to live there."

One Perfect Summer (2020)
Brenda Novak
"Any Brenda Novak book is a must-read for me."