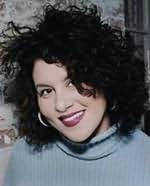 (b.1964)
Bestselling author Adriana Trigiani is beloved by millions of readers around the world for her hilarious and heartwarming novels. Adriana was raised in a small American coal-mining town in southwest Virginia in a big Italian family. She chose her hometown for the setting and title of her debut novel, the critically acclaimed bestseller Big Stone Gap. The heartwarming story continues in the novel's sequels Big Cherry Holler, Milk Glass Moon, and Home to Big Stone Gap. Stand-alone novels Lucia, Lucia; The Queen of the Big Time; and Rococo, all topped the bestseller lists, as did Trigiani's 2009 Very Valentine and its 2010 sequel Encore Valentine. (Known as Brava, Valentine in the U.S.)

Trigiani teamed up with her family for Cooking with My Sisters, a cookbook coauthored by her sister Mary, with contributions from their sisters and mother. The cookbook-memoir features recipes and stories dating back a hundred years from both sides of their Italian-American family.

Distant Shores (2002)
Kristin Hannah
"There are a lot of real-life lessons here told with truth, humor, and courage. You will love this story."

Life's a Beach (2007)
Claire Cook
"Life's a Beach is filled with hilarity, sister love and sister hate, juicy arguments and hard-won reconciliations, but most of all heart."

Beginner's Greek (2008)
James Collins
"James Collins has written a romantic, funny and insightful page turner about love in modern times, missed opportunities and the wheel of fate (with a blow-out!) that is so engaging and real, you will find it impossible to put down.Peter Russell is an everyman filled with longing, lust and good sense. I promise you will root for him as fate throws him curves aplenty on his path to true love. BEGINNER'S GREEK and Peter Russell are keepers."

Breaking the Bank (2009)
Yona Zeldis McDonough
"Masterful, modern, and magical... a story that keeps you on the end of your seat from start to finish."

Cherries in Winter (2009)
Suzan Colón
"Delicious. Delectable. Truthful, funny, and poignant...A treat to share with those you love."

Those We Love Most (2012)
Lee Woodruff
"Lee Woodruff has written a beautiful, humorous, poignant page-turner about the complexities of love and marriage, tricky family dynamics, and the power of the human heart. Everything you want in a great read is here, including wonderful storytelling that builds to a satisfying ending. Loved it."

The Rosie Project (2013)
(Don Tillman, book 1)
Graeme Simsion
"A world so original, in a story so compelling, I defy you not to read through the night. Read this glorious novel now, in the moment, where it lives."

Guests on Earth (2013)
Lee Smith
"This is Lee Smith at her powerful best."

All the Single Ladies (2015)
(Lowcountry Tales, book 11)
Dorothea Benton Frank
"A great storyteller, a ray of sunshine. If she were a cocktail, she'd be fizzy."

Falling for Prince Charles (2016)
Lauren Baratz-Logsted
"Curl up and get ready to laugh long into the foggy night."

The Arrangement (2017)
Sarah Dunn
"THE ARRANGEMENT is a novel you'll share with your friends. You'll talk about it. You'll return to it. It's one of those. A keeper."

The Forever Summer (2017)
Jamie Brenner
"Put your feet up, sip a cocktail and let Jamie Brenner surprise and delight you with the first great read of summer."

The Last Days of Cafe Leila (2017)
Donia Bijan
"A glorious treat awaits you at the literary table of Donia Bijan."

Women in Sunlight (2018)
Frances Mayes
"The beloved Frances Mayes seems to own the Italian sun. Her first Italian-set novel is a lovely and intimate journey of friendship, loss, and hope set in the eternal beauty of Tuscan countryside. All of Ms. Mayes signature insights are here...there is healing and forgiveness that only a sojourn to Italy can provide. Che bella!"

The High Season (2018)
Judy Blundell
"You will revel in the human drama and comedy of this skillfully told tale. Wise, funny, and insightful, Judy Blundell tells the story of one woman that says something about all of us, our aspirations, and the delicate state of the American dream."

Meet Me At the Museum (2018)
Anne Youngson
"Precise, clear, funny, poignant, and truthful. This is a work of art, dear readers. Revel in its beauty."

Southernmost (2018)
Silas House
"Southernmost is an emotional tsunami. The classic themes of great literature written about family life are upended here in a modern twist as a father and son flee one life in search of another; as estranged brothers separated by time and their judgement of one another seek redemption and through the women in their lives, antagonists in the struggle who become grace notes on the road to redemption. This is a story of faith lost and love found, and what we must throw overboard on the journey in order to keep moving. A treasure."

Eagle & Crane (2018)
Suzanne Rindell
"Suzanne Rindell takes to the heavens in this glorious story of two daring aviators during the Great Depression. She’s written an epic love story set against a time of upheaval, suspicion and change. A magnificent novel from a great writer."

American Pop (2019)
Snowden Wright
"Spectacular...This is an American saga of one man's ambition, the woman who stoked it, and the family whose complex identity it became...What a ride!"

Time After Time (2019)
Lisa Grunwald
"Here is a glorious novel to savor and return to again and again. I fell in love with Joe and Nora, star-crossed lovers from a time when women wore gloves, men wore hats and a train ticket could change the course of your life. The spectacular Lisa Grunwald has written a classic story of fate, true love, art, and chance with truth and beauty. You will want to share it with every reader you know."

Dragonfly (2019)
Leila Meacham
"Leila Meacham is a gift to readers everywhere. With scope and daring, she creates worlds in her fiction that keep us turning pages long into the night. Sumptuous, full bodied and emotional, Dragonfly soars."

The Mercies (2020)
Kiran Millwood Hargrave
"A novel for our times with artistry and skill. Maren's story is powerful, at turns, it is disturbing, and ultimately illuminating. You will ponder it long after you finish this magnificent work."

The Rearranged Life of Oona Lockhart (2020)
Margarita Montimore
"Margarita Montimore has written a dazzling novel. This madcap opera, the story of Oona Lockhart's life told in full with scope and breadth in and out of sequence but never out of tune, is the perfect read for this moment. Modern, emotional, funny, ferocious, and spun with enough light and magic to fire up the Vegas strip, Oona Out of Order lands like a meteor."

The Lion's Den (2020)
Katherine St John
"Sex! Intrigue! Jealousy! Betrayal! Secrets! Batten down the book clubs, Katherine St. John is on deck! This dazzling novel is chock full of delicious characters, who flaunt their sins and peccadilloes, like the latest Birkin bag. Come aboard for a fabulous read, pure escape, beautifully written. Loved it!"

Tsarina (2020)
Ellen Alpsten
"As detailed as the jewels and enamel inlay on the creations of Faberge...[a] crisp, elegant fictional account of history, woven with emotion and brio."

Eliza Starts a Rumor (2020)
Jane L Rosen
"Jane L. Rosen is a sparkling, original voice. With hilarity and heart, she takes us into the intersecting lives of Eliza, Alison, Amanda, Jackie and Olivia in the picturesque Hudson Valley where life is anything but perfect. Secrets are revealed, grudges form, forgiveness is found, men come and go but through it all, divine friendship endures in this glorious read. A book club pick for sure, a must read for you! Spread this Rumor and fast!"

The Lions of Fifth Avenue (2020)
Fiona Davis
"The magnificent Fiona Davis has written a page turner for book lovers everywhere! I was on the edge of my seat as Laura Lyons, the ambitious essayist, breaks down social barriers and finds herself adrift in her own life at the end of the Belle Epoque in 1913 New York City. Secrets are revealed eighty years later by her granddaughter, who found her way into the family business, working at the New York Public Library. This is a story of family ties, their lost dreams and the redemption that comes from discovering truth."

Rules for Being Dead (2020)
Kim Powers
"Kim Powers writes a glorious novel about a boy and his journey to feel whole after the mysterious death of his mother. Mr. Powers’ prose is artful and searing as Clarke's story unfolds in a Texas town so vivid, the reader is there. Secrets are revealed, hope is lost and found, and redemption awaits in this beautifully rendered tale about love and loss, and the courage to face the truth with an open heart."

The Woman in Red (2020)
Diana Giovinazzo
"The Woman in Red is an epic tale of one woman's fight to take control of her circumstances to create the life of her dreams. Anita Garibaldi is a modern woman in the 19th century who led with her heart despite circumstances so dire, most mortals would give up. Her passionate affair with Giuseppe Garibaldi freed her from a provincial life into one of passion, danger and purpose. Ms. Giovinazzo has crafted a spectacular story in this stunning debut."

A Dog's Perfect Christmas (2020)
W Bruce Cameron
"A fabulous read . . . Cameron writes with wit, style, and holiday hilarity as only he can. Loved it!"

The Star-Crossed Sisters of Tuscany (2020)
Lori Nelson Spielman
"Emilia Fontana is a princess in sensible shoes in this delicious modern fairytale where love is elusive, hope is a pipe dream and a centuries old curse on the second sister remains intact. Lori Nelson Spielman deftly weaves the past and present with artful twists and turns that will keep you reading and hoping as secrets are revealed that change the course of Emilia's life, her perceptions of herself, and ultimately unleashes her potential in a world that was waiting for it. Bella!"

This Magnificent Dappled Sea (2020)
David Biro
"David Biro has written a glorious novel about connections over time, through war and displacement, to life affirming twists of fate that change the course of the lives of Luca Taviano, an Italian boy and Joseph Neiman, a rabbi. Grief and love are intertwined in the experience of Italian Jews and this beautiful novel tells that story weaving in and out of time as secrets are revealed and redemption is lost and found. Brava!"
Visitors to this page also looked at these authors
Susan Wiggs
Anne Tyler
Jodi Picoult
Elin Hilderbrand
Scott Turow
James Patterson
Nora Roberts
John Grisham
John Sandford
Lisa Scottoline
Brad Thor
Nicholas Sparks
David Baldacci
Danielle Steel
Karin Slaughter
Stuart Woods