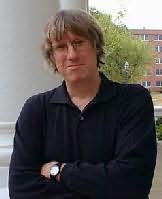 (b.1956)
Steve Yarbrough is a novelist and short story writer.

Born in Indianola, Mississippi, he received his B.A. and M.A. in English from the University of Mississippi and his M.F.A. in Creative Writing from the University of Arkansas. Writing largely within the Southern tradition, he draws his themes and characters from Southern history and mores in ways that have been compared to Flannery O'Connor, William Faulkner, and Willie Morris.

He is married to the Polish literary translator Ewa Hryniewicz-Yarbrough and they have two daughters, Tosha and Lena. He lives in Stoneham, Massachusetts.

Dodgers (2016)
Bill Beverly
"I knew before I'd gone very far into Bill Beverly's superb first novel that I was about to lose some sleep, since putting it down seemed to be beyond me. To say it's a page-turner doesn't do it justice, though it certainly is. It's also much more. His characters are vivid and real, and yes, sometimes they'll break your heart. The world they inhabit--no matter where they may be at a given moment--all but leaps off the page. It's a winner. So is its author."

Promise (2018)
Minrose Gwin
"Promise is a powerful story about yet another forgotten chapter in our great national drama. Minrose Gwin knows her characters well and writes about them and their place and times with sympathy and wisdom."

The Girl From Blind River (2018)
Gale Massey
"One of the most impressive debut novels that has ever come my way. Taut and vivid, it is beautifully textured and it announces the arrival of a very special writer whose work I expect to read for many years… A gem."
Visitors to this page also looked at these authors
Steve R Yeager
Ayelet Waldman
Randy Wayne White
Joseph Wambaugh
Cleo Coyle
Mary Kay Andrews
Kathy Hogan Trocheck
Susan Wiggs
Steve Walker
Robert Westbrook
Minette Walters
Marc Cerasini
Kasey Michaels
Denise Dietz
Carlene Thompson
Booth Tarkington